Mysterious destinations of the world 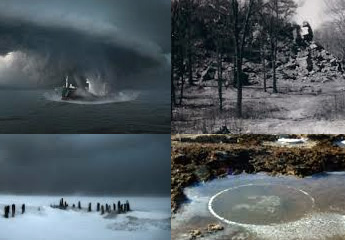 Science has solved many mysterious of nature; however there are still few unresolved ones. The mystical points have raised curiosity since ages and several theories have been put forth to explain their existence, however most of them are still unexplained and thrill us every time we watch or listen something about it.

Bermuda triangle – Think of mysterious places and Bermuda triangle will be at the top of your list. This triangular area located in Atlantic Ocean and has been responsible for disappearance of several planes, ships and people. Various theories including high gravitational pull, alien abduction or mere human error has been associated with this triangle. Nevertheless it is considered as one of the creepiest places on earth.

Bridgewater triangle – Another equally terrifying triangle is the Bridgewater one, located about 200 square miles away in Southeastern Massachusetts in US. This area is well known for numerous paranormal and supernatural activities. This area has stories of weird and mysterious creatures like tall, hairy ape like creatures, thunderbirds, giant Pterodactyl like creature, red-eyed dog and many more. It has also been a hot spot for UFO spotting.

Michigan Triangle – The list of mysterious triangle seems to be unending. One more in list is the Michigan triangle. It is located in the middle of Lake Michigan and is a spot of land and sea crafts disappearance. Famous amongst them are Captain Donner and Northwest Airlines Flight 2501. The mystery of many such disappearances which occurred here is unsolved.

Bigelow Ranch – Earlier known as a Skinwalker or Sherman Ranch, this place is popular as a home for several UFOs. Innumerable mysterious incidence like mutilation of animals, spotting of UFOs and their occupants, floating balls of light are recorded in this place. Robert Bigelow owns this ranch till date and his organization – National Institute for Discovery Science is researching on it.

Devil’s Sea – A unique area located in the region of Pacific Ocean about 100 km south of Tokyo has been linked to disappearance of several ships. During 1952-54 Japan lost five military ships with crew strength of around 700 people. A ship carrying over 100 scientist who were sent onboard for research was also lost. Japan has officially declared this area as danger zone.

Few other equally strange places are San Lius Valley (famous for innumerable UFO spotting), Bennington Triangle (mysterious disappearance of people), Point Pleasant (known for presence of a creature- Mothman), Superstitious Mountain and many more. The mystery of these places continues to unfold till then its best to avoid them.