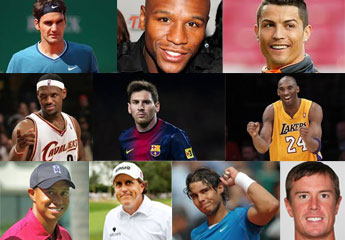 According to the Forbes report of The World’s Highest-Paid Athletes 2014: Behind the Numbers, top 100 highest paid sport personalities across the world earned a collective of $2.75 billion over a span of 1 year which was up by 5% compared to previous year. The report also mentioned that the rise in salaries of the players are on account of increasing TV rights which gives impetus to higher revenues across sports, as well the increase in prize money and a good endorsement income.

The highest paid sportsmen mainly are in basketball, football, soccer, tennis, cricket and few in track and field events. Following is the list of 10 highest earning sportsperson of 2014.