Some famous and successful interracial marriages 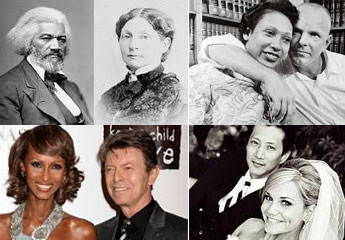 Following is the few famous and successful interracial marriages.

So for all those who thought interracial marriages are rare and don’t work out easily this list will surely challenge your opinion. These are just a few examples of those who have fought obstacles to be together. Today, we see many such successful pairs in all strata of society. Most of them may not be famous but still have fought and are fighting their own battles, while few are readily accepted. However, one thing that each of these couples proves is, Love does not see color or race, and two people in love can overcome hurdles and live happily forever.