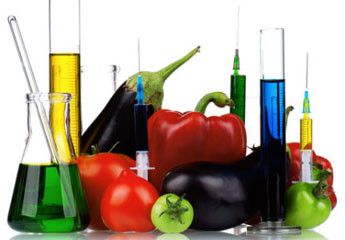 Genetically modified (GM) foods are the food stuff produced by means of genetic engineering. These changes are introduced either to add new characteristic or modify the existing one. Conventionally, this was done using breeding; however the modern techniques uses molecular biology and other sophisticated procedures. Briefly, the process involves inserting the gene of interest (which will be responsible for enhanced features) into the relevant plant or organism to derive the intended benefits. For example: Bacillus thuringiensis, is an organism which produces a toxin against insect larvae. The gene of this organism has been used to make corn crop pest resistant.

On the other hand GM foods have some disadvantages as well to offer:

The process of producing GM foods is a lengthy and costly affair. It demands rigorous testing to avoid undesirable changes and threats to both surrounding and society. GM foods can solve many food problems but strict regulations need to be in place to ensure that no unacceptable changes are being introduced.