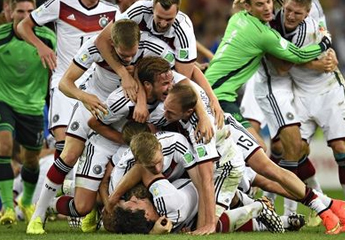 Whether sex affects an athlete’s performance or no, has always been a debatable question. FIFA World Cup 2014 also faced this question and saw diverse solutions. Some coaches strongly believed depriving their players from relationship and sex will enhance their performance, while some allowed nature take its course.

Countries like Russia, Mexico, Chile, and Bosnia and Herzegovina had completely banned their players from having sex during the competition. Mexico’s Manager also said “If a player can’t go one month or 20 days without having sexual relations, then they are not prepared to be a professional player.” We guess these coaches strongly believed that abstinence would help the team perform better.

The next set of countries included the ones who allowed sex but imposed certain restrictions. France, Brazil, Costa Rica and Nigeria are amongst them. France allowed players to have sex during day but not at night to ensure that the players get enough sleep. Brazilian coach said his players can have normal sex but must surely avoid acrobatics while Nigerian players were allowed to be accompanied only by wives and not by girlfriends. Costa Rican coach had promised his player that they can have sex once they are through to elimination rounds.

Germany, Spain, the United States, Australia, Italy, Netherlands, Switzerland, Uruguay and England allowed their players to enjoy relationships during the World Cup. Italy’s coach Cesare Prandelli, mentioned that the presence of WAGs and children would benefit the players and relieve them of tensions. For England player’s it was a relief as they had faced the no-sex situation during previous world cup.

There were various reasons why these rules were laid. Some managers believed that abstaining from sex, helps preserve energy, build up aggression and prevents psychological repercussions which may affect the player’s performance in field. Though none of the scientific studies till date have actually proved any of these benefits, the strong belief against sex still prevails amongst the players and their coaches. Contrary to this traditional belief, it has been proved that sex burns only 200-300 kcals and the testosterone boost it provides can help improve muscle and leg power.

The amusing part is all the no-sex teams suffered an early defeat while those that made to finals were allowed to meet their partners and enjoy a normal life.