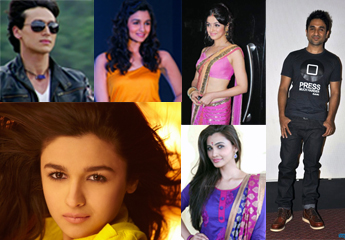 Bollywood is one of the largest film productions house in India and worldwide. It is a dream place for all budding stars. It is a popular career destination not only for actors but also for singers, musicians and directors.

Each year several people make debut in Bollywood. Here we have captured a glimpse of few of those who are tried to imprint their footprints at the greatest film centre in 2014.

Tiger Shroff – Son of Jackie Shroff, Tiger Shroff made his debut in film industry as an actor in the movie – Heropanti. Though the film was not a blockbuster, Tiger Shroff did seem to receive appreciation for his acting, dancing and action sequences. His stunt scenes especially attracted good audience for his debut flick. Though critics opined, his acting needs a lot of improvement, yet he seems to have done quite well as a newbie in his first movie. We look forward for more powerful performances from him.

Daisy Shah –  Another actress who made her debut with a blockbuster is Daisy Shah. Pairing opposite superstar Salman Khan in Jai Ho, she began her career in Bollywood as an actor. She had started as a background dancer, choreographed dance numbers and also made guest appearance in few films; however it was Jai Ho that gave her a break in a lead role. The movie was quite a success, and Daisy Shah received a warm welcome to the film industry as in actress.

Divya Khosla – Is not a new name in industry. A known producer, actor and a director of several music videos, she made her directorial debut with the movie Yaariyaan in 2014. She had begun her career as an actor in Ab Tumhare Hawale Watan Saathiyo. Later she did courses in cinematography and editing, and directed several successful music videos. Though Yaariyaan wasn’t a blockbuster, yet it was liked by teenagers. However, a first fall in Bollywood career does not mean an end; it’s just a stepping stone to success.

Alia Bhat – Wondering why the gorgeous Alia Bhatt is in the category of debutants for 2014; well that’s because this time we are mentioning her not as an actress, but as a singer. We all have seen her mettle in acting in movies Highway and 2 States. Alia Bhatt made her playback singing venture with the song Sooha Saaha along with Zeb in the movie Highway. Her song was well appreciated and she can of course look at singing as an additional exploring ground.

Vir Das – Another actor to join the gang of singers is Vir Das. He made his singing debut with songs – Devika and Pyari hai Kutti Cheez in the movie Amit Sahini ki List. These newly released songs are already getting a good response. Though these are his first Bollywood songs, the actor has previously sung for his band Alien Chutney.  With a melodious voice Vir Das can surely join the singer’s club.