Most dedicated and hardworking personalities 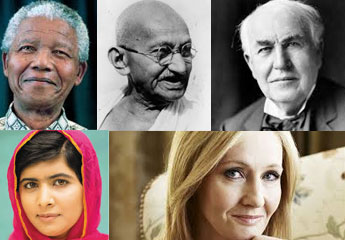 Legends born; survive all adversities, rise to pinnacle and die. What they leave? They leave their names behind, which is remember by generations long after they have all gone. They create their own destiny by defying all odds thrown towards them by this dubious life. Here is our earnest tribute to those great souls, who made us proud and leave their imprints, which we can follow for years in times of distress and despair:

Nelson Mandela – Think of a person who was dedicated to his cause and fought against all odds to achieve his goals, and Nelson Mandela comes to your mind irrespective of your race, religion or country. Nelson Rolihlahla Mandela, as we all know was a South African revolutionary, philanthropist and served as South African president from 1994 to 1999. As a young law student, he involved in political opposition to the white regime. He rose to prominence in the ANC’s 1952 Defiance Campaign and the 1955 Congress of People. Initially he committed to non-violent mass movements, however later accepted the armed action after an unarmed protestor was shot down. In 1961, after becoming the commander of ANC’s armed wing, he was arrested and imprisoned for five years. Later again in June, 1964 he was sentenced life imprisonment. While in prison he rejected offers made by jailers for remission and remained committed to his principles. He was later released in 1990, after South African President F.W. de Klerk lifted ban on ANC and other anti-apartheid organizations. Mandela received Nobel Prize for Peace in 1993. After his release he led the party in multi-party negotiation resulting in first multi-racial elections. During his tenure as president and even in the following years he worked hard for variety of social and human rights. His fight against inequality and racial discrimination resulted in number of changes in the socio-political environment and helped thousands of individuals to live a better life.

Mahatma Gandhi – Another such eminent leader who devoted his life for betterment of his countrymen is Mohandas Karamchand Gandhi. Mahatma Gandhi was an Indian freedom fighter, who meticulously led people against the British rule. He was responsible for several movements like – Civil Disobedience Movement, Quit India, Dandi Salt March etc. Gandhiji, a lawyer by profession spent 21 yrs of his life in South Africa where he opposed racism and developed the concept of Satyagraha – a non-violent war for devotion to truth. In 1915, he returned India and soon became an active member in Indian freedom struggle. He played a pivotal role in Indian freedom fight and stuck to his principle of non-violence and Satyagraha irrespective of the hardships. He was sentenced to imprisonment but he did not give away his struggle and nurtured his dream for a free and better India. Along with the fight for independence he also made an impact on the social life of people. Opposition to purdah (veil), child marriage, untouchability was few important issues addressed by him. Though, Mahatma Gandhi faced several oppositions and difficulties throughout his life, he remained dedicated to his cause and never compromised on his principles.

Malala Yousafzai – Malala Yousafzai, a young girl from Pakistan who stood up against the system and Taliban to promote the right for education is a very well known personality today. Malala was born on July 12, 1997. She attended a school founded by her father Ziauddin Yousafzai. After Taliban started attacking girl’s school she gave a small speech in Peshwar, Pakistan wherein she questioned the audience “How dare the Taliban take away my basic right to education?” She started blogging for BBC since 2009, about living under Taliban threat. As a child, she became an advocate for girl’s education and continued to speak about rights of women. She received several threats from Taliban but continued on her mission to promote educational rights to women. On October 9, 2012 a gunman shot her while she was returning home from school. She underwent major surgeries and was shifted to United Kingdom for rehabilitation. Luckily she had not suffered any major brain damage and resumed her schooling since March, 2013. Owing to her efforts and commitment she has been nominated for Nobel Peace Prize in 2013 and again in 2014.

Thomas Edison – Scientist and their dedication to work is a common phenomenon. All the scientists put in a lot of time, knowledge and efforts to reach their goals which can take indefinite amount of time and lots of patience. The list of such scientist is quite long; we have selected one amongst them – Thomas Alva Edison. Thomas Edison was an American inventor who developed several devices and probably the most important one is the electric light and power utilities. He has more than 1,093 U.S patents to his name. Ironically when he was young, his teachers thought he was too stupid to learn anything and his mind often wandered. He could attend school only for 3 months and was later homeschooled by his mother. Edison became a voracious reader, gaining knowledge from variety of books. He developed hearing problem at an early age. Thomas Edison rose from humble beginning to become a great inventor. His invention list includes telegraph, phonograph, electric light bulb, alkaline storage batteries and Kinetograph. A highly dedicated scientist, Thomas Edison continued to conduct experiments and achieve great results. His most famous quote “I have not failed. I’ve just found 10,000 ways that won’t work.” implies his quest for knowledge and success.

J.K Rowling – We cannot surely miss including J.K. Rowling, the author of widely read series – Harry Potter in our list. These Harry Potter series have gained worldwide attention, several awards and has sold more than 400 million copies. Movies based on these series have become highest-grossing film series in history. However, this astonishing success did not come easily to her. She conceptualized the idea in 1990, while she was on a four-hour delayed train trip from Manchester to London. She separated from her husband in 1993 and thought herself as a failure owing to a failed marriage; she was jobless with an independent child. During this period she was also diagnosed for clinical depression and contemplated suicide. Her illness inspired the concept of Dementors, soul sucking creatures. Rowling signed in for Welfare benefits, and began teachers’ training course. She wrote her stories in cafes and approached several publishers for her book. Her first book Philosopher’s Stone was rejected by a dozen a publisher but she continued to approach others for publishing her book. However, Bloomsbury a small London publisher ultimately published this book on request of his eight-year daughter. She soon reached pinnacles of success and today is ranked amongst the richest people in United Kingdom. Within a span of five years she went from being a poor, single parent dependent on welfare to become a rich and successful woman only due to her hard work and perseverance.