Some amazing use of Robotics Engineering 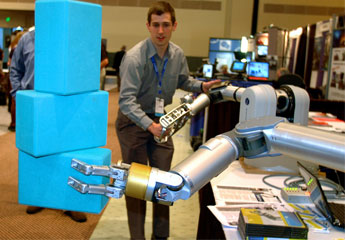 An example of interdisciplinary science which has brought together several branches of science and engineering is Robotics. It can be defined as a branch of engineering which has emerged out of amalgamation of mechanical, electrical engineering and computer science. In other words, it is the branch in which one deals with the design, operation and construction of robots   . The robots are overall handled and operated by means of computer systems, which in turn needs intensive sensory information to be fed and programming to deal with such robots. Robots, as most of us imagine is something which tries to mimic the human behavior and can perform every simple and complex task which we are capable of doing. In recent times the branch of robotics has been growing immensely with its demand and scope too growing exponentially.

The first digital robot was ‘Unimate’ which was deployed in 1961 to help in lifting hot metal pieces and stack the same. Similar industrial robots have been then released and used to perform complex tasks at a much faster rate and efficiently at the same time. The research in robotics is promising enough with respect to its scope. Most of the research is around the usage of robotics in various aspects of life ranging from industries to personal use. Robots have evolved to act as a friend to humans in helping them to perform the daily chores as well. As a whole, robots are programmed as per the intended usage. Many programming languages are being employed to make sure the robots act the way they are built. Off late, many open source robotics projects have also pitched in demanding more research avenues in the same.

As far as the education is concerned, branch of robotics have grown in the field of education. Many colleges and universities have started offering robotics either as part of their existing curricula or as a separate specialization courses through different modes. Over the period of time, the branch has emerged as one of the exciting inter-disciplinary field and many aspirants have been found benefited from the same due to its ever increasing demand in the market.

As mentioned, robotics has been used extensively; here are few important usages of robots:

Apart from the above applications, there are other uses which can be amusing as well. Here are some examples of the same:

Slowly and swiftly robotics are shaping the future and it would be interesting to witness the same, but just making sure we don’t overuse the same.