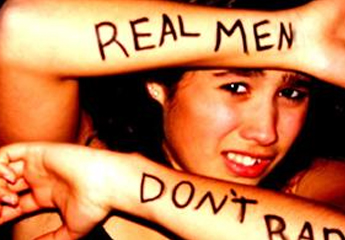 Rape is the fourth most common crime against women in India. National Crime Records Bureau 2013 annual report, reported 24,923 rape cases across India in 2012. However this is just a small number, which are reported, the actual figures may be much higher, since in our society a victim suffers much more than the rapist and hence prefers remaining silent. Statistics indicates that in 98% cases rapist is known to the victim and could be a neighbour, relative or a family member.

Various studies have tried to reveal the reasons for rapes. Few of them are,

Manhood surely stand for strength, but also implies protection, compassion and understanding. The idea that men rape for sexual pleasure is not correct. There are other better ways to satisfy such urges. Rapes are done with the intention to harm the victim, enjoy the triumph over the weak, gain control and exhibit unwanted masculinity. However, real men don’t rape, it is an act of weak. It is done by individuals who are no less than animals, who do not have any self control, who are insecure and are afraid of being rejected by women and those who are morally and culturally poorer than a beggar.

Infact true virtues of manhood are strength for protection, respect for weak and empathy with others. Real men do not opt for unnecessary violence, they do not gain sadistic pleasure by humiliating others and they do not need to prove their masculinity at every possible opportunity. Real men understand that there is no happiness in defeating someone weaker than you, but honour lies in humility, standing upright against wrong, and respecting and loving others.

Man belongs to animal clan; we are regarded as social animal, more advanced, intelligent and evolved. However, the irony is male animals even when packed in hordes are never seen raping a defenceless female or a cub, but men do. Children as small as those in months are raped, gang rape and honour rape as a punishment is a common occurrence in tribes and lower caste.

The greatest threat to our country is crime against women, more threatening than terrorism. The law and regulation have failed too miserably to bring down the rape cases. Silence of victims and trival punishment or compensations has encouraged rapes and violence. However, as a responsible citizen and a human being it is our duty to prevent such deeds, support the victim and take appropriate measures.