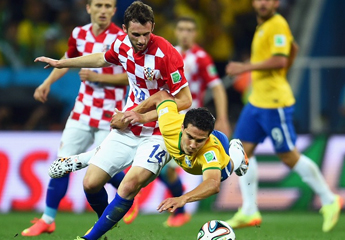 Brazil suffered a humiliating defeat in FIFA world cup 2014 against Germany in Semi Finals, which was compounded with another disastrous defeat of losing the No 3 spot against Netherlands. Probably the worst ever defeat for Brazil was 7-1 against Germany. Several reasons have been attributed to this sad state of the host country’s team.

Absence of Thiago Silva, the Brazilian captain during the Tuesday match against Germany was one main factor that contributed to the Brazil’s defeat. Not having their experienced defender, who was replaced by Dante made Brazilian defence vulnerable. Thaigo Silva, who was playing as central defender was the key in holding Brazilian defence line intact and alive. Dante could not match Silva’s pace, also the direction that the teammates received from Silva was lost. Silva and Luiz shared a dynamic understanding which was difficult to recreate with a replacement.

Owing to the injury, Neymar was unable to play in FIFA 2014, which proved to be a major loss for Brazilian team. Neymar, Brazil’s top scorer had a unique striking style and his replacement was surely not as capable as him to earn the much needed goals for Brazil. Apart from scoring goals, he was livewire in binding and coordinating most of Brazil’s attacks in the whole tournament. Also absence of Neymar, gave a mental blow to the teammates who heavily relied on him.

Brazilian No 9 and No 7 – Fred and Hulk respectively, looked out of the form in every match, but were part of Brazil’s attack in every next match. This clearly shows Brazilian was having poor bench strength.

Midfielders Luiz Gustavo and Fernandinho failed to stop attacks and if in case they did, they lost the ball quite immediately. Also the coordination between midfielders and attackers was poor which was disastrous to the team.

Brazil seemed to be emotionally unprepared for the world cup. Absence of two important players was an immeasurable loss and the team was incapable to overcome it.

Even with the world class players and ability to win, Brazil represented lack of planned strategy and tactics which proved to be a major drawback. Overall the team suffered a much unpredicted defeat leaving a lot of Brazil supporters disheartened and in tears.